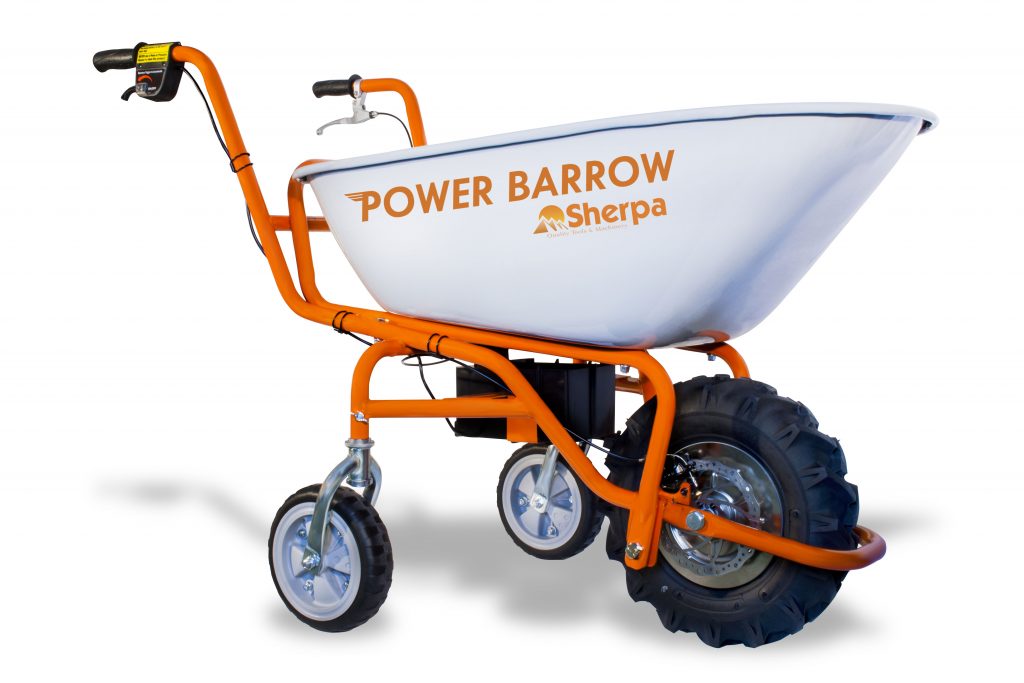 This cordless powered wheelbarrow will move heavy loads at the squeeze of a trigger. The pivoting tipping mechanism means unloading is easy. No need to lift as the castor wheels take the weight.

A very high quality, self propelled cordless electric wheelbarrow which is perfect around the garden, yard, stables and building sites. The massive 170 litre galvanised steel tray is mounted onto a pivot system, allowing it to be easily tipped even with a heavy load.

Designed for easy use, it has a variable speed lever to control the drive speed and a brake lever (with locking function), which operates a disc brake attached to the
front wheel.

For added traction, stability and braking power, the front wheel uses a chevron tread tyre to help manoeuvre the Power Barrow over a number of different surfaces. Additionally the rear wheels can turn a full 360º so the barrow can easily be turned on the spot. The frame uses a heavy-duty tubular steel design to keep the barrow strong, yet lightweight. The wheels use race bearings and the drive motor automatically disengages if pushed to allow you to manually use the Power Barrow as you would any other wheelbarrow.

Easy Tipping System
The Power Barrow is designed to allow easy tipping of the tray. Just
pull the clip to unlock the tray and tip it forwards. The tray tips beyond the front wheel for efficient unloading.

Variable Speed Control
Once switched on, just pull the lever to drive the Power Barrow. Fitted with variable speed control, simply pull the lever gently for a slow speed or fully for maximum momentum and drive power.

Rechargeable Battery
The 24v heavy duty battery pack easily removes for simple charging and sits securely beneath the tray. It has enough juice to complete an average day’s work.

Chevron Tread Tyre
The front tyre features a chevron tractor style tread for optimum traction on rough and uneven surfaces and helps the Power Barrow to maintain drive even in more demanding environments.

Powerful Disc Brake
To keep the barrow under control you can use the disc brake to slow the barrow and control its decent on a hill. It can also be locked on the handles to hold the barrow’s position.

Castor Rear Wheels
The rear wheels of Power Barrow are fitted on castors which allow full 360º independent movement for easy manoeuvrability and on-the-spot turning without having to lift it like a traditional wheelbarrow.